The best Star Wars Comic ever 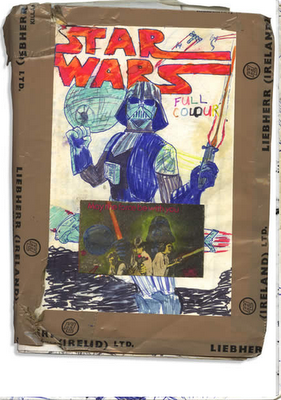 This is an genuine work of love – Star Wars – adapted by the nine-year-old John White, from Dublin, between 1977 and 1983. The comic book is a genuine re-imagining as John had only his recall of cinema screenings of the recently released movie and comic to work off.


Around Christmas time 1977 a nine year old budding artist started to draw his own comic adaptation of his favourite film; just seen in the cinema, with no DVDs, books or comics to guide him . The early results were peculiar, but it was fun and some consolation for only seeing it once. Less obsessed friends would claim "We saw it 6 times!": he yearned to see it again.

Some time later, he got his hands on the British printing of the Marvel comic and treasured it. his drawing improved and with the comics, bubble-gum cards and the full-colour photos in the novel he began the process of drawing, re-evaluating and redrawing - casting the older pages in the bin.

So now reader, here's the very odd fruit of that 4 or 5 year effort. Rediscovered only last year. The shabby 1977 home-made comic becomes 2010 web-comic.