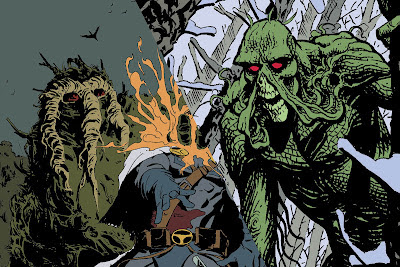 The Man-Thing flats were for Deadpool Kills the Marvel Universe #4 for me old mate Lee Loughridge, and the Swampie flats are for DC's Swamp Thing #0 for my new mate Matt Wilson.

The menacing Man-Thing appeared in the first series of horror comics I collected as a teenager— pocket sized Chiller – I used to buy one or two a week for 20p out of a box at a local flea market. The Secret of Swamp Thing was also the first graphic novel I bought in the last 80s. So, this has been a very rewarding week for me.
Posted by Dee Cunniffe at 12:27 PM