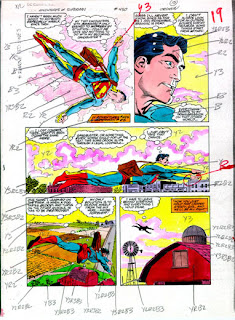 Let’s talk about old school colouring.  For 40 years color in the American comic industry used a simple, hand separated 4-colour (CMYK) system. The colors were made of three percentages of each of the three printing inks (CMY): A 25% dot, a 50% dot, and a 100% (or solid) color. The possible combinations of these tints gave colourists a palette of 64 possible colours to use  – though most used no more than half of them. Many of the darker colours were indistinguishable in print. Limiting the palette to 64 colours kept printing costs down, and were about all that would reliably reproduce on the cheap newsprint paper used for comics. Airbrushing and special colors and effects were reserved for covers, which were printed on heavier coated paper stocks.

To create a light green, for instance, a code of Y2B2 was used. This meant that 25% of Yellow (Y2) and 25% of Cyan (B2) are needed to get that colour. In order for the colour guide artists to be able to communicate with the colour separators, charts of the 64 colours with their codes were printed and distributed to the colourists.

Copies of the original art were made at 8 ½ x 11, and the colourists would write codes from the chart on the guides, which the separators used to know which colour the guide artists wanted.

The separator, which for much of comics history was Chemical Color Plate in Connecticut, would make nine acetate prints of the original art, one for each percentage of each color. The black and white artwork – originally drawn at twice the printed size, then 1½ times, and currently slightly less than that – was photographed, reduced and printed on sheets of clear acetate. Nine copies were made of each page – one for each of the three percentages of the three colours – and these were turned over to a separator often house wives paid by the page). Using the coloured artwork as a guide, areas on the acetates would be filled in with an opaque paint (Rubylith) to correspond to the colour indicated. Once the colour guides were fully “translated” and the acetates were finished, they would be photographed with appropriate screens to create a single version which included the percentage dots and the solid of one colour. These three new pieces of film, along with a fourth clean version of the art which was used to make the black, were used to make the printing plates.

But that was in the olden days – now, it’s almost all done with pixels.
Posted by Dee Cunniffe at 4:01 AM