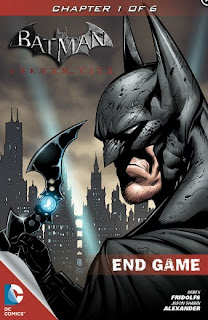 Issue 1 of Batman Arkham City: End Game is now out on the DC Comics app for .99c. Download it now - the art by Jason Shawn Alexander and Lee's colours are outstanding.

This is the first of six digital-first comics which finds the Joker's reign of terror continuing despite his death. The Clown Prince of Crime had a contingency plan, it seems, and now Batman and the Gotham City police are left to deal with it.

IGN have a great interview with writer Derek Fridolfs.

You can find some of my flats here.
Posted by Dee Cunniffe at 2:56 PM