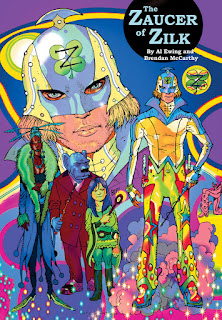 The first few pages of Brendan McCarthy's return to comics – 2000AD's The Zaucer of Zilk – are arriving in my dropbox for flatting. The new strip, which follows the adventures of an interdimensional magician, will mark the artist's first original story in decades.